Galleri Brandstrup proudly presents the exhibition Hunted by Bow and Arrow by Øystein Dahlstrøm. The artist will show seven new series of works, consisting of thirty staged photographs that he has been working on over the last two years.

Dahlstrøm is known for his powerful photographs where architectural constructions and abandoned objects are his subjects. With these photographs, he mostly shoots outdoors before he processes them digitally to create a sense of seamless photographical montages.

In his new exhibition Hunted by Bow and Arrow, Dahlstrøm has been inspired by the absence of the architectural, set in context of the human basic need for spatial structures. In his observations, he has been fascinated by concepts as “space” and “time” as basic existential terms for humankind.

His approach is directed towards the life of the homeless, with a special focus on a group that has settled down underneath one of the most trafficked streets in Oslo. For the artist, poverty has been an interesting theme, as an aberration that leads to a sense of being outside conformity in a welfare society where poverty should not exist.

In his first series Preconditions, the artists has concentrated on human basic elements, which become more obvious under circumstances where only basics are accessible. The series show a sequence of photographs visualizing human primal needs, showing water, fire, bread and clothes, shifting at the surface of the same table in front of a black monochrome backdrop. They create references to the tradition of the still life paintings of the Renaissance, however as a bleak opposition.

Dahlstrøm describes how homeless people use primitive methods to create a feeling of living in spaces, where occupants place rocks around them creating nest-like constructions, which stands in contrast to the usual architectural materials and structures we surround us.

The series Of Violence symbolizes the desperate attempt to create spaces around us when we are without. The artist Lucio Fontana is known for violently cutting the canvas with a knife to create a physical dimension in the painting. Dahlstrøm has taken interested in this performative attempt to create space, and has used an axe to cut through the wooden surface in the series of photographs in Of Violence. By this, he wants to make a reflection on how humans always changes the landscape that surrounds them.

In the two series Drift and I am The Space the artist has let himself inspire by a quote by architect Juhani Pallasmaa; «Lived space is always a combination of external space and inner mental space.» In Drift and I am The Space Dahlstrøm puts forward the crossing between mental and physical space, on the borderline between the outside and inside. In the works, one can recognize a few objects that we associate with interior, such as chairs, cabinets and tables, as well as elements from nature and public areas.

The exhibition Hunted by Bow and Arrow is supported by Norsk Kulturråd and Billedkunstnernes Vederlagsfond. 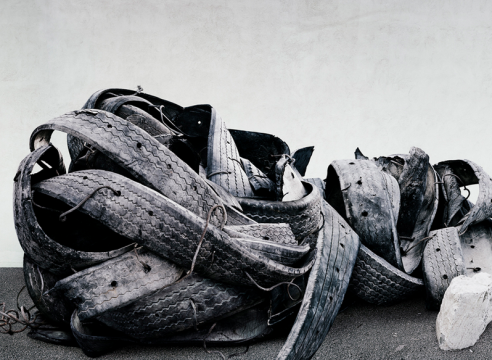