Through the works presented in Joy of Sublimation, Fredrik Raddum explores existential ideas about distraction, anchoring, isolation and sublimation. The body of work shown is inspired by Norwegian author and metaphysician Peter Wessel Zapffe and French-Algerian philosopher and author Albert Camus, and their respective ideas on our existence. While Zapffe contends that life is so miserable that it makes sense to liquidate all of humanity, Camus argues that we must accept the absurd and realize that life is meaningless.

With ”Joy of Sublimation” Raddum takes us into his existential universe and shows us what directions life can take. Do we dare to look the absurd in the eye or do we let the distraction take control? With life at stake, all one can do is to spin the wheel of fortune. 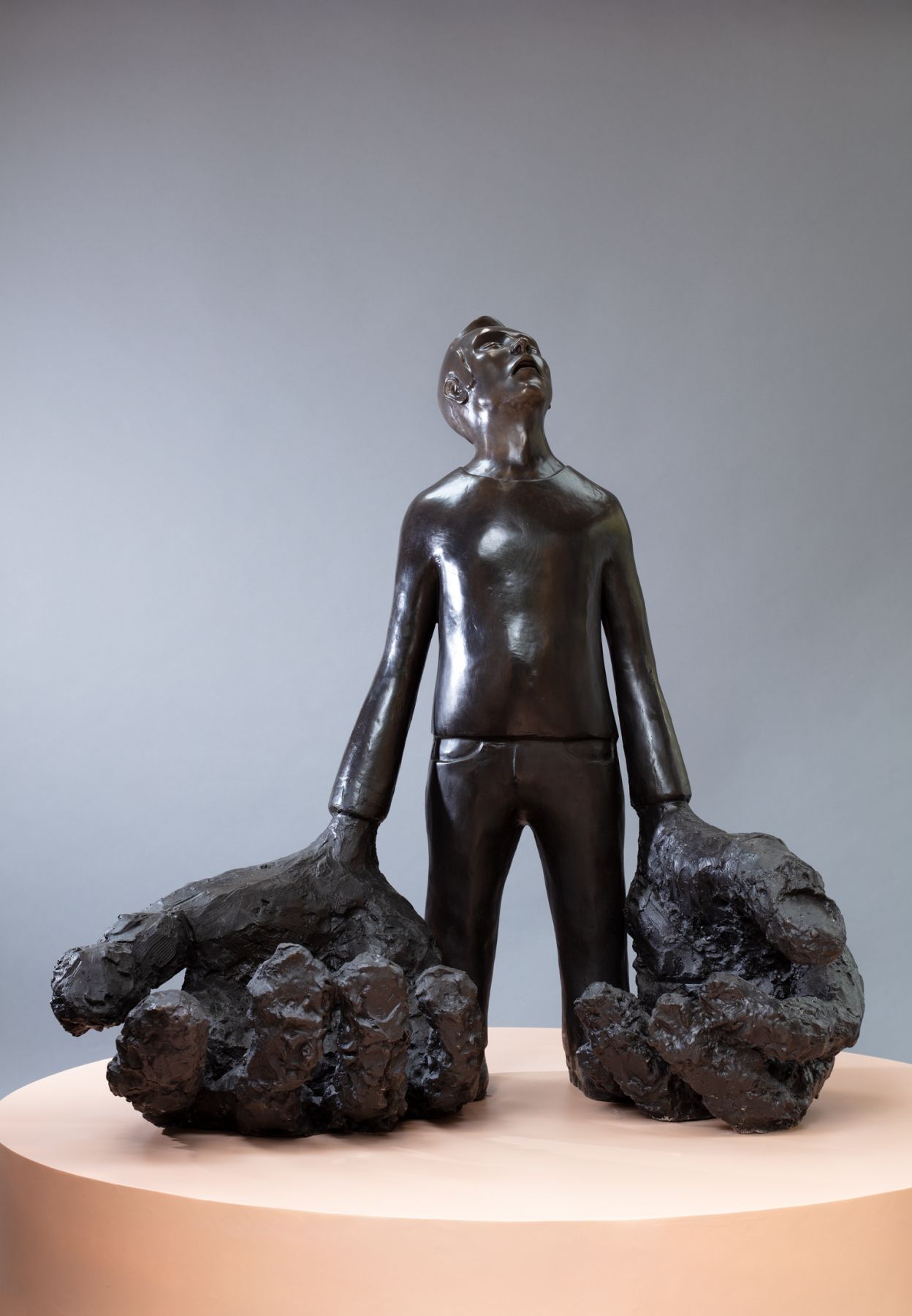 In many of this exhibition's sculptures, I try to relate to the displacement mechanisms of existentialism; distraction, anchoring, isolation and sublimation. How can we deny or supress that life is meaningless? We demand that the world and life itself has meaning, but this very demand is met with silence from a world that is utterly independent of us. In the gap between man's need for the meaningful and the meaninglessness of life, the absurd arises. The absurd is nourished by this gap.

We seek to reduce this gap by artificially reducing the content of consciousness. – Isolation (Isolation); to work your life away so reflection does not get the best of us. - The distraction (God of Distraction); constant impressions from the outside which distances us from deeper thoughts. Anchorage (Lord of Sublimation); to find a goal, save the world, or believe in a god. Sublimation (Joy of Sublimation); to transform the pain of life with the help of artistic abilities, and accept the insight.

But what if we stop repressing and to a greater extent accept the absurd? Albert Camus claims that the moment we realize that we are made to live in the present moment - the insight emerges that the moment offers abundance of opportunities. The joy of life exists in the moment. My exhibition “Joy of Sublimation” leads in its entirety to this realization; freedom exists in the absurd.

I built Wheel of Fortune as a complex “try-your-luck-machine” with multiple wheels. Layer upon layer of possibilities, glitter and light. It has the classic ticking sound we all know from the game show with the same name, but the “wheel” is also equipped with holes that lead you into the unknown.  If one follows the suggestion to start from the top, it is easy to get lost and possibly not understand where the path will lead.

Concepts from existentialism are accompanied by colourful fun fair lights, arrows and spinning parts. But when you reach the point of absurdity, then the opportunity opens up to be catapulted towards anxiety or freedom. Anxiety can lead you on to nausea or down into death, while Freedom leads you to new experiences, art and the opportunity to climb into the clouds. The complexity of it all can be overwhelming. If the viewer takes a step back and look at “Wheel of Fortune” as a the whole, I hope they will see that my intention has been to create a guide to life, which often can seem as much confusing as explanatory. 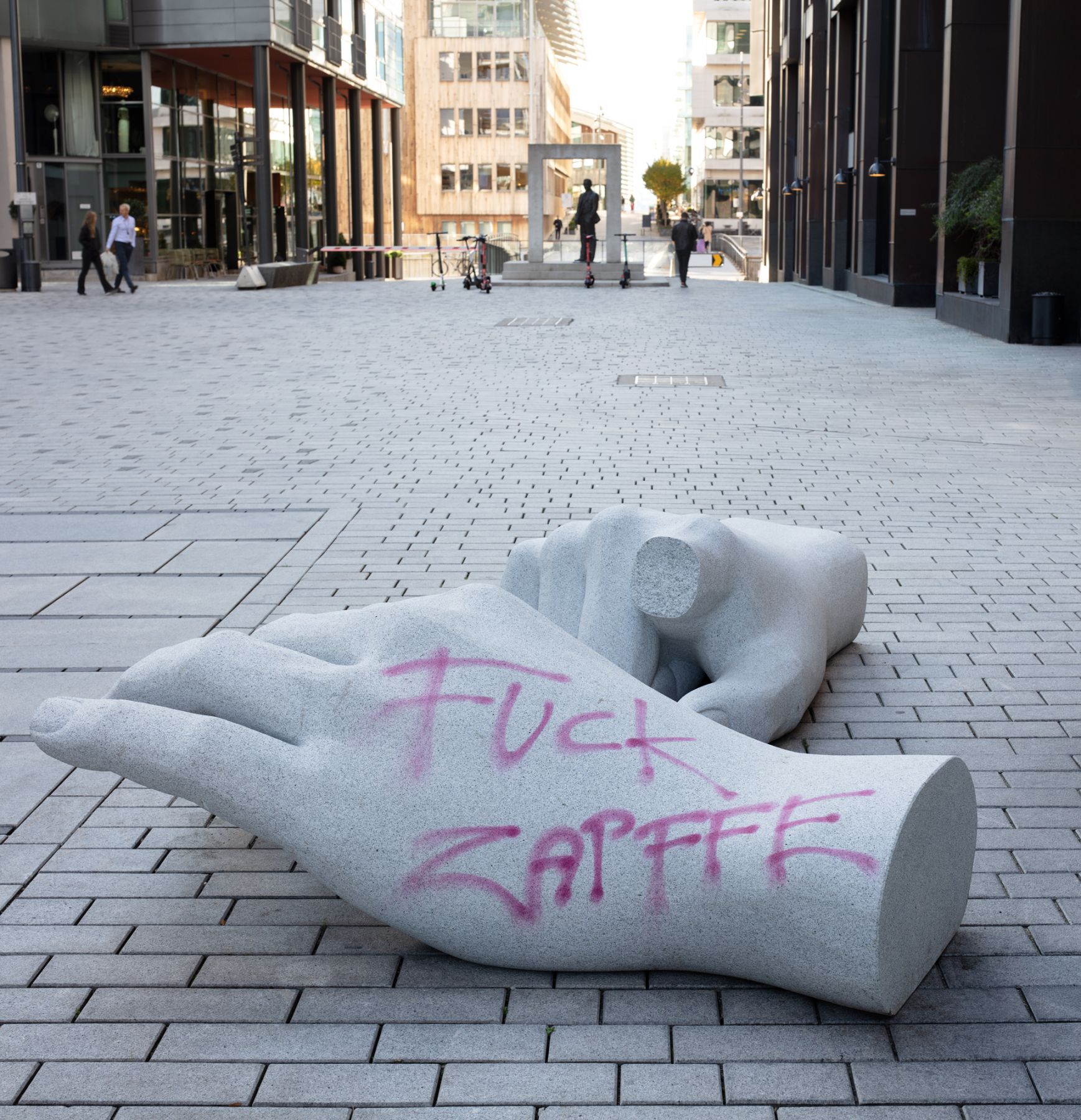 Public art installations are lasting monuments that highlight a theme or person that should be meaningful to society as a whole. Graffiti on the other hand, has long been the form of expression of subcultures, where the individual wants to create a temporary monument to himself or his opinions. In the meeting between these two, a relationship arises that problematizes the monument's form and permanence. The substantial and classic granite is pitted against the rebel's fleeting roar.

The stone hands are a monument to Zappe's desire to end reproduction and let human kind die out. Graffiti constantly challenges and stands for a life-affirming impulsive act that denies Zappffe's gloomy outlook on life. The scribble challenges the antinatalist and suggests that Zapffe should throw himself into the joys of life. I am transforming the monument into an anti-monument through my actions, which in turn are triggered by major disagreements with the Zappe.

One spring day I was going for a walk in the woods, I met my neighbor, Fredrik. He lives there at the edge of the forest, in the same artist homes that I live in. We had a chat, and I do not remember how we got into Albert Camus, but there are many who is reading “The Plague” these days, maybe that has something to do with it.

I have always found solace in reading Camus. It helps that he has been here on earth before me; when he's been here, I'll be able to be here too. He has become one of the authors with whom I have an ongoing conversation; we talk about literature, about what I write, about what he has written. I read “The Stranger” every time I am about to start a new novel and cannot figure out how to do it. To read a great work written by another author is to open the doors for my own writing, it opens up the possibilities that I can write something good myself. I read “The Stranger” and think that this is how you do it; this is how you write a novel. Before I write something completely different. You do not write what you want to write, you write what you can write.

Fredrik said that he was in the process of completing an exhibition based on Camus' “Myth of Sisyphus”, which was a strange coincidence – as I was putting in the finishing touches on a novel where the very same book runs like a red thread through the story.

Something happened to me when I first read “The Myth of Sisyphus” - it felt true, foreign and recognizable at the same time. It made the world look a little different. So, what is it with this essay by Camus, about the gap between man and the world - the absurd; about how man, when he cannot explain the world in which he lives, feels like a stranger? Camus is after all not the only thinker who has dealt with life's lack of purpose and meaning.

Maybe it was Zappfe’s uncompromising “No to Life Onwards”, which was the reason why Fredrik sounded abandoned, almost upset.

Fredrik showed me his studio so I could look at the works of the new exhibition. A small dog greeted me eagerly, the assistant stood and cut out something in the backyard, the room was full of large sculptures, plaster sculptures that would soon be cast in bronze. Getting to see inside one’s work place, is a rather different way to get to know your neighbor, compared to a little small talk at the edge of the forest about yesterday's volunteer work, it is to discover something completely new about a person.

It is also special to experience art in the room where it is created. I thought about the role of the light that came in through the windows, the size of the studio, I had to stand completely still so I would not stumble into a broken plaster finger on the floor. I understood that the finger was probably not aimed at me, but rather at Zappfe.

According to Zappfe, we use evasive manoeuvres, or repression mechanisms, to avoid dealing with all the metaphysical questions we are drawn to, and the subsequent frustration that the missing answers will fill us with. Manoeuvres that I recognize myself well in, so thus perhaps the finger was pointed at me anyway.

I saw myself lying trapped at the bottom of the woodpile, completely exhausted from the work, but fortunately too tired to think about the meaning of life. I can hide the problem, let myself be distracted by constantly new impressions from the outside, or I can transform the pain, make it something else through writing.

I saw myself in the sculpture Fredrik had created, in the artist's self-glorification, especially the halo over my head suits me well - I like myself better when I write than when I look for distractions outside myself.

But is there really anything better? said Fredrik.

According to Zappfe, none of these solutions are worthy. Rather than looking to the side, we must acknowledge the problem and accept defeat with open arms. The only way out is to let humanity die out - either through suicide or cessation of reproduction, says Zappfe.

This is a solution that can make anyone upset and dejected. So why be in these thoughts longer than you have to, why use it in an art exhibition? I myself often write from something I do not understand, something that hurts, it's like poking an inflamed wound, it's constantly stepping on the sore foot, pushing on the loose milk tooth with my tongue, I cannot help it.

There are always new flaws in my mind, in the notion of what the world looks like, the way I want it to be, and I must write to heal the flaws. When I write, it's as if I transform the slaps that life hands me, the disappointments that come my way, the feelings I do not want, the thoughts I cannot endure, into something else. What I write from, what I write about, will then change, it becomes something else; to create art is to get rid of something. At the same time, it is to hold on, because now this anger, this pain and hopelessness is trapped inside the art, but as something other than when it only existed inside me. I myself have become a different person in the process.

I looked at the seemingly elusive book lying on the small table next to the door from the studio, The Myth of Sisyphus. Unlike Zappfe, Camus says that even if life does not make sense, it does not have to mean leaving it. On the contrary! he says. One must dare to see the truth in the eye, life is absurd! One must let the thought reach its limits. This is the real effort, to stay there, as long as possible, exploring what is in these remote areas. Suicide, the physical or the spiritual, is an escape from the absurd, while living in the absurd is a rebellion against the fate assigned to man.

Camus has thought these thoughts, plowed up the thought paths for me, and then I as a reader can let my thoughts move out into areas where I otherwise would not have thought I could go and did not have the ability to go. As I make these thoughts my own, they become a fixture within me.

Something from the Myth of Sisyphus that has taken root in me is how there is a closer connection between the absurd and happiness than one might think. Sisyphus knows that his stone is his business, that his destiny belongs to him and no one else. And this universe, where there is no lord other than himself, is no longer perceived as barren and meaningless, on the contrary, it is infinitely rich - every grain in the stone and every bit of the pitch-black mountain alone constitutes a world. Therefore, one must believe that Sisyphus is happy.

For me, the words I write are the stone I carry, for Fredrik it is the sculptures. And then it may not matter so much whether it is also a displacement mechanism or evasive manoeuvre.

On the way out into the woods again, I nodded goodbye to the sculptures that had now gained a bit of life, they had each acquired their own personality, after this time I had spent with them.