A foreword by Sverre Bjertnæs

We have known each other for a long time Christer and I, we come from the same city, Trondheim. People have a calmness of character in that region of the country and so do the painters. They’re not concerned with big gestures and temperament, not violent projections and eruptions either. Instead, they promote a sense of ambitious modesty. Like Lars Tiller who devoted his whole life to the endless possibilities of painting a square surface in a thousand variations. Lars Tiller was concerned with the painterly fields and how they could seemingly open and close spaces within the painting; how the colour itself is relative depending of its neighbouring counterpart. Large issues resolved within strict formal conditions. Or Ramon Isern who made sensitive collages, always following the same humble path, the language of painting and texture. Christer’s new paintings remind me of these two.

Its in a sense a daring title Christer has chosen for this exhibition, “The painter“ singular.

Perhaps within the title lies an acknowledgment of his own practice, of the self, this is me. I’m the one who paints. And the painting occurs almost always as a singular. A painter and a canvas and sometimes a painter against a canvas. A battle of justification and the right to join the line of previous painters.

Christer has in retrospect been concerned with several different attitudes towards painting. He made his artistic debut within a figurative and naturalistic language with large compositions, filled with figures often painted and set within dramatic lighting. However, in later years, it seems that the paint itself has been given a bigger part. Applying paint to canvas became more important than creating an image. A painting for painting sake.

In Christer’s paintings, the fields of colour and the way the paint is dispersed becomes the main story. How a cool grey-green colour lays on top of a grey-pink and makes the colours vibrate to become impossible to describe. Or how a line jumps to the next as to lead your eye to make a space even though the canvas is flat. Shape conquers content. Shape is Content.

In Christer’s works the figures are genderless and classless. They appear as historical figures half forgotten halfway remembered. They become anonymized in order to join the ranks. The titles refer only to simple characteristics, "Painter with palette", "Painter carries canvas", "Painter with bucket and brush". The last title brings to mind a kindergarten child. The painter gets to go through life playing. 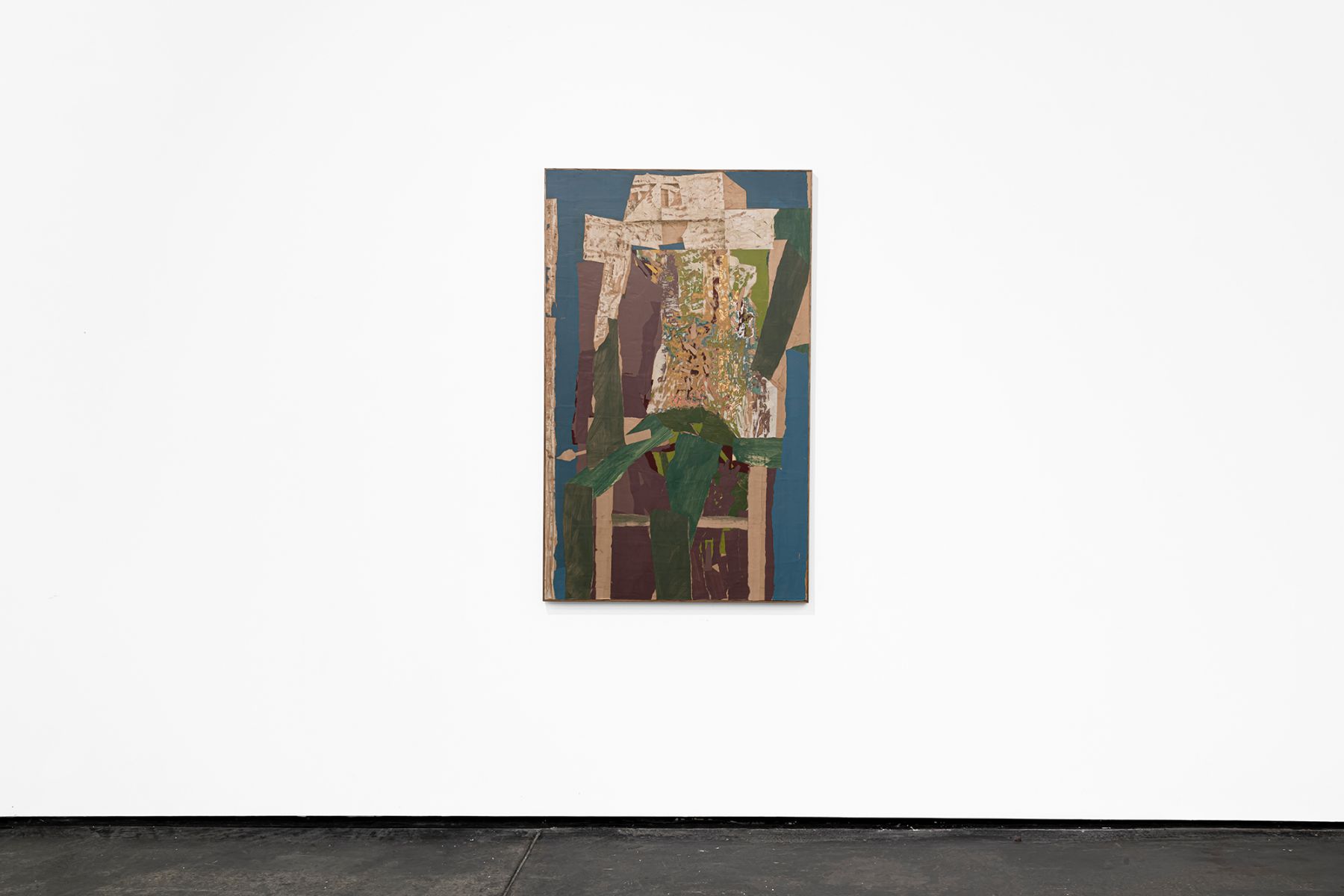 The last title leads the mind towards a child in kindergarten. The painter strolls trough life playing. In “Painter carrying canvas the figure becomes a part of his own creation and is seemingly erased from the lines of the canvas his carrying. Everything has dissolved, both the painter and the canvas.

To make images today is different than before. We are flooded with images, authentic and manipulated ones. Regardless of the attitude of today's painters, the battle of the cultural forefront is not fought with a brush, nor is the class struggle. Opposed to this a character appear among the painters seemingly holding a sabre. Maybe the struggle of the image isn’t fought and lost altogether yet.

The paintings also show traces of many of the famous painters who have gone before. Like De Kooning, the archetypal, iconic and masculine painter-hero. But in “painter carrying canvas” Christer has instead inserted direct references from Pat Passloff, the female assistant of the Kooning. She was also a painter but was left to the shadows by the stature of her mentor.

In Christer's work of heroic painters, the figures look as if they, no matter how much they struggle to defy their frames, are sentenced to a life just there. Trapped within four corners, struggling to inject life onto a dead square, and that this action will prevail over any subject matter. It is as the works say; that when the painter dies, he doesn’t become earth, but paint; far from the subject matters, the ambitions, the careers and the galleries and the rest of a life gone by.

Then maybe we are left with this one thing, a painting existing only for the painting itself, and that leads the painters struggling on. 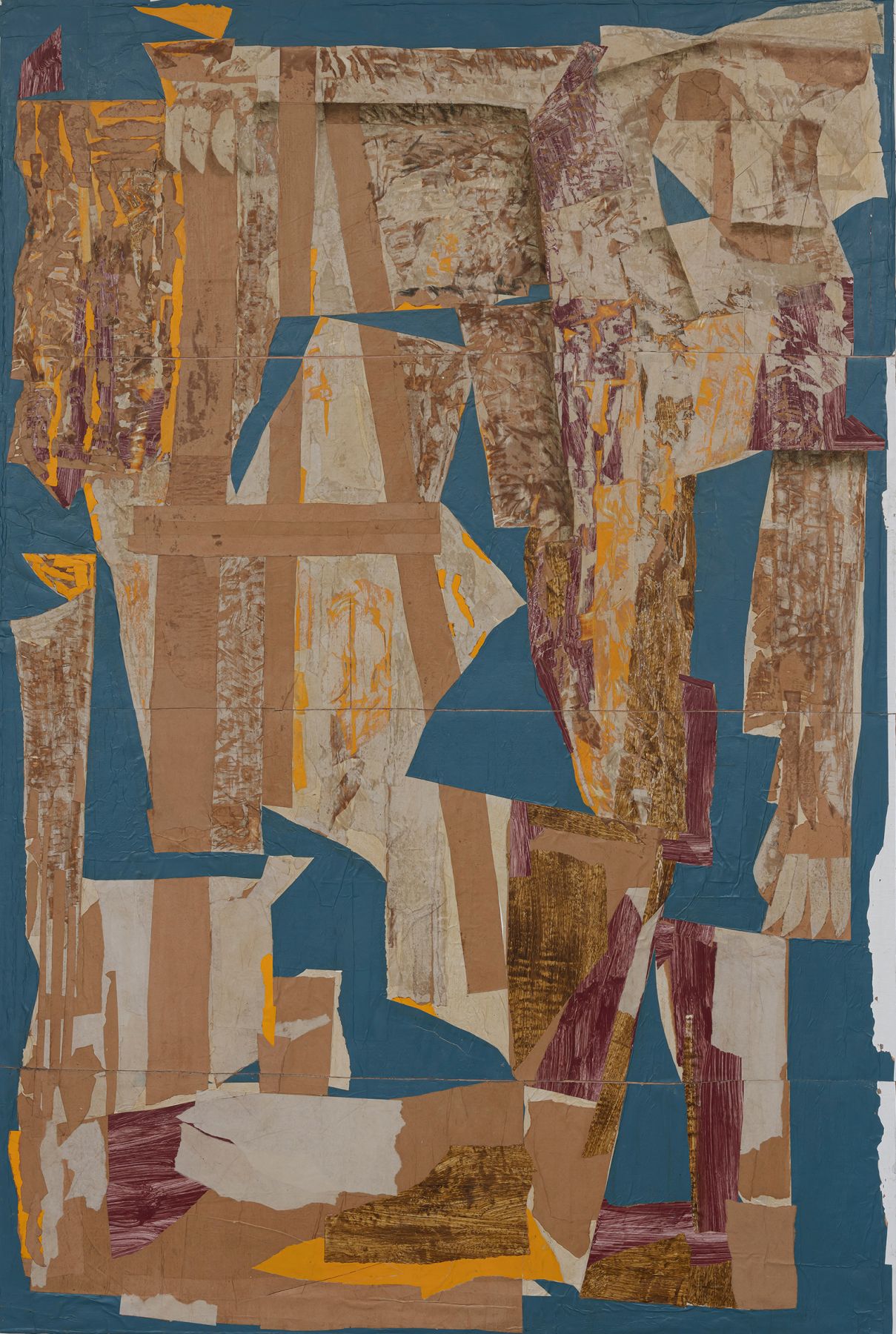 The word easel is an old Germanic word for donkey. In various other languages, its equivalent is the only word for both the animal and the apparatus, such as Afrikaans: esel and earlier Dutch: ezel (the easel generally in full Dutch: schildersezel – painter’s donkey). The figure in the painting is seen reaching his hand over the easel, resting his hand on the ever present donkey that carries the canvas steady day in and day out.Throughout the canvas fields of bright golden yellow is seen flickering against the sky-blue colour. Due to its widespread domestication and use, the donkey is referred to in myth and folklore around the world, although the mythology varies from culture to culture the color yellow seems common in both Greek and Egyptian history.

In Egypt the donkey was the symbol of Ra the sungod (yellow). The most famous king Midas is popularly remembered in greek mythology for his ability to turn everything he touched into gold (yellow) Midas was given the ears of an ass after misjudging a musical competition.[2] 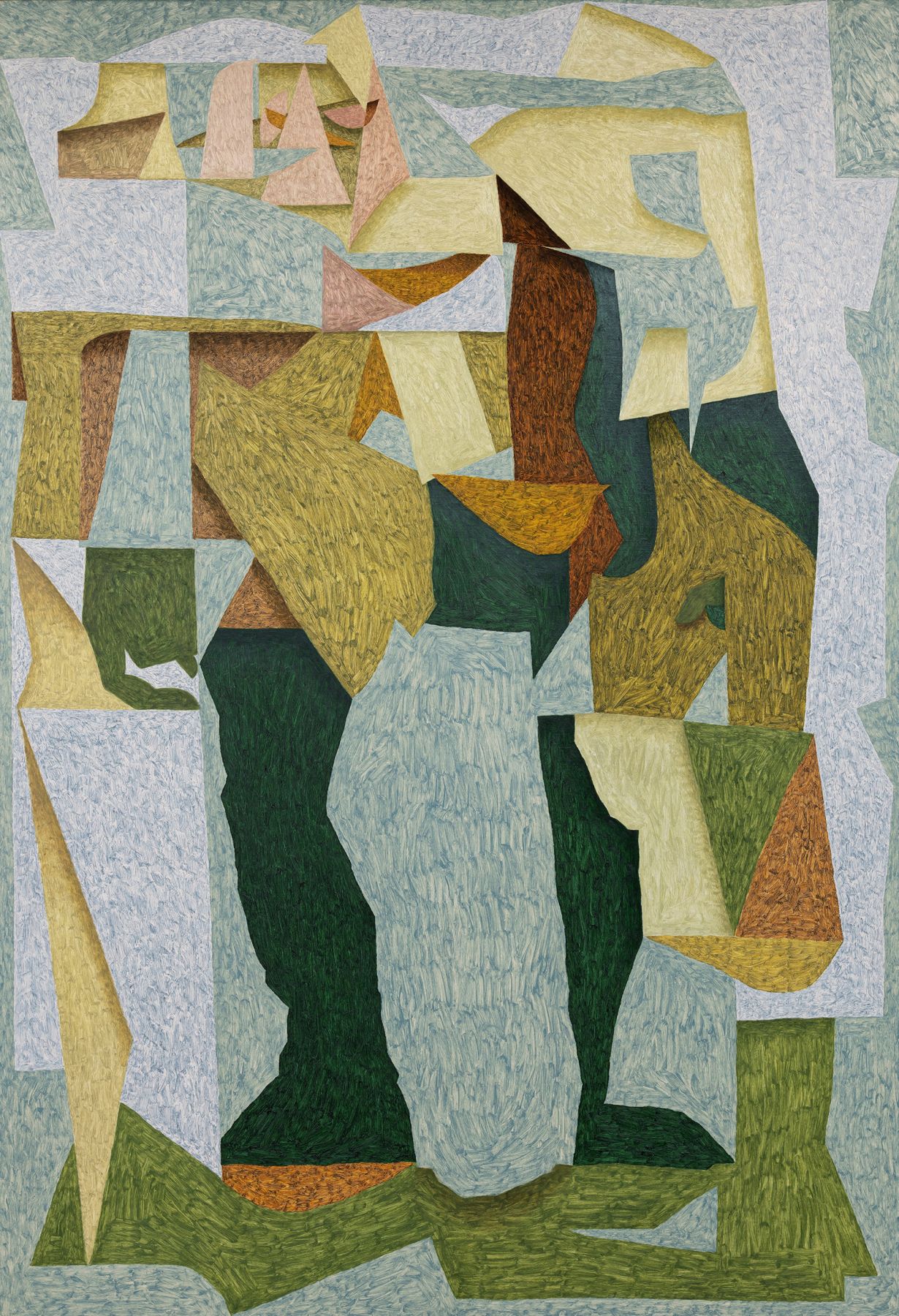 For a while, I had been tinkering with the idea about revisiting some paintings from 2016, but I had come to terms with the fact that there was no time with the deadlines a head.

I had just arrived back from an art fair in New York when the pandemic broke out. After two weeks of quarantine and facing the walls of the studio, existing plans for the upcoming exhibition somehow seemed old and dated. A while later my exhibition was postponed with six months. I revisited and reworked the idea of the old painting and that became the start of a series of new work, although now the character in the painting had become a painter holding a palette. The figure seemed cramped by the edges of the canvas, like a bull in a china shop balancing from shape to shape.

Painter with brush and canvas 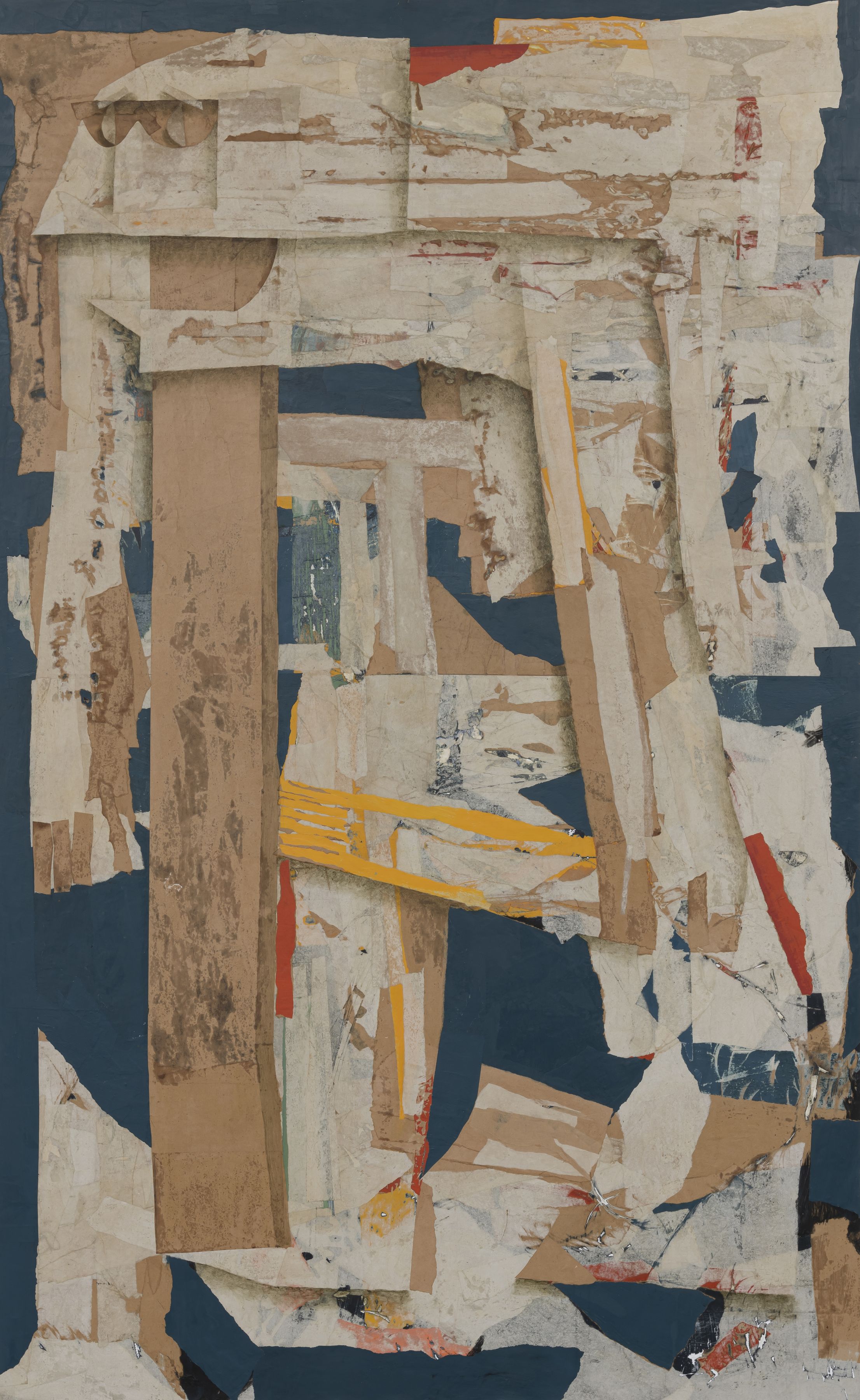 This was the first work involving paper and painted paper as materials. Layers of painted paper mounted onto canvas similar to the technique of wallpapering. Dipping the paper in glue soaked water before smearing the material on the surface with a rubber spatula removing the excess water. The process felt gestural like painting, only I was painting with already dry paint. I was looking for a way to replicate my technique of painting trough a different media, mimicking the pattern the bristle brush makes while it lays down and removes paint at the same time. A cosmos that when worked on continuously becomes a still-freeze of the time spent creating the work. The figure itself appears to be painting, his eyebrows angled downwards holding a brush towards a distorted canvas. I guess all the figures in this exhibition are self-portraits in a way, characters formed by shapes balancing like a still-life ready to disassemble at any moment.