Galleri Brandstrup is proud to present “Maleren” (The Painter), a solo exhibition by Christer Glein; a truly beautiful and insightful homage to the painter. The exhibition will open on November 12, 2020.

A foreword by Sverre Bjertnæs

We have known each other for a long time Christer and I, we come from the same city, Trondheim. People have a calmness of character in that region of the country and so do the painters. They’re not concerned with big gestures and temperament, not violent projections and eruptions either. Instead, they promote a sense of ambitious modesty. Like Lars Tiller who devoted his whole life to the endless possibilities of painting a square surface in a thousand variations. Lars Tiller was concerned with the painterly fields and how they could seemingly open and close spaces within the painting; how the colour itself is relative depending of its neighbouring counterpart. Large issues resolved within strict formal conditions. Or Ramon Isern who made sensitive collages, always following the same humble path, the language of painting and texture. Christer’s new paintings remind me of these two.

Its in a sense a daring title Christer has chosen for this exhibition, “The painter“ singular.

Perhaps within the title lies an acknowledgment of his own practice, of the self, this is me. I’m the one who paints. And the painting occurs almost always as a singular. A painter and a canvas and sometimes a painter against a canvas. A battle of justification and the right to join the line of previous painters.

Christer has in retrospect been concerned with several different attitudes towards painting. He made his artistic debut within a figurative and naturalistic language with large compositions, filled with figures often painted and set within dramatic lighting. However, in later years, it seems that the paint itself has been given a bigger part. Applying paint to canvas became more important than creating an image. A painting for painting sake.

In Christer’s paintings, the fields of colour and the way the paint is dispersed becomes the main story. How a cool grey-green colour lays on top of a grey-pink and makes the colours vibrate to become impossible to describe. Or how a line jumps to the next as to lead your eye to make a space even though the canvas is flat. Shape conquers content. Shape is Content.

In Christer’s works the figures are genderless and classless. They appear as historical figures half forgotten halfway remembered. They become anonymized in order to join the ranks. The titles refer only to simple characteristics, "Painter with palette", "Painter carries canvas", "Painter with bucket and brush". The last title brings to mind a kindergarten child. The painter gets to go through life playing.

The last title leads the mind towards a child in kindergarten. The painter strolls trough life playing. In “Painter carrying canvas the figure becomes a part of his own creation and is seemingly erased from the lines of the canvas his carrying. Everything has dissolved, both the painter and the canvas.

To make images today is different than before. We are flooded with images, authentic and manipulated ones. Regardless of the attitude of today's painters, the battle of the cultural forefront is not fought with a brush, nor is the class struggle. Opposed to this a character appear among the painters seemingly holding a sabre. Maybe the struggle of the image isn’t fought and lost altogether yet.

The paintings also show traces of many of the famous painters who have gone before. Like De Kooning, the archetypal, iconic and masculine painter-hero. But in “painter carrying canvas” Christer has instead inserted direct references from Pat Passloff, the female assistant of the Kooning. She was also a painter but was left to the shadows by the stature of her mentor.

In Christer's work of heroic painters, the figures look as if they, no matter how much they struggle to defy their frames, are sentenced to a life just there. Trapped within four corners, struggling to inject life onto a dead square, and that this action will prevail over any subject matter. It is as the works say; that when the painter dies, he doesn’t become earth, but paint; far from the subject matters, the ambitions, the careers and the galleries and the rest of a life gone by.

Then maybe we are left with this one thing, a painting existing only for the painting itself, and that leads the painters struggling on. 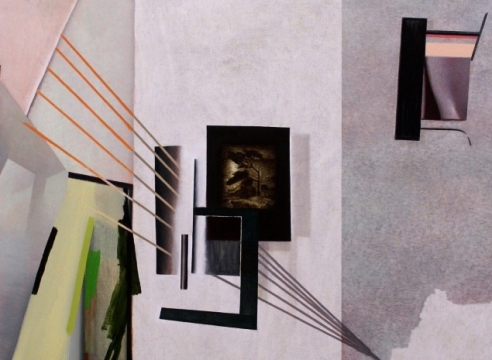